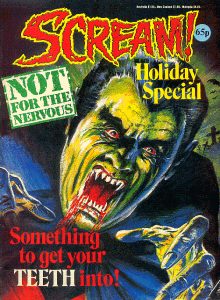 If 1985’s special was a tad disappointing, things were about to get worse with 1986’s effort.  There are even less links to the original comic with just a text-only Monster story (instantly skippable for most kids),  an out of context Dracula File and no Thirteenth Floor stories.

Instead we get a lot of Library of Death and Ghastly Tale type efforts but also a repeat of last year’s filler with lots of comedy strips, quizzes and fan art.

The best thing was an uncoloured look at what would have been the cover of Issue 18 which was due for release on July 21st 1984.  This cover would ultimately be completed and used for Best of Eagle Monthly #2.

Castle of Death – Feeling like an unbranded Library of Death effort, this story follows two boys who are making their way to a castle on a hill.  One of them is afraid but is goaded into following his friend inside.  The make their way to the top where a man in a mask startles them.  In retreating they fall from the turret to their death below.

Later the man, a vermin exterminator, explains what happens but when the Police explain that no bodies were found and the boys sound similar to two who died the same way months before, he realises that they are ghosts.  We then see them begin their journey again, doomed to repeat it for all of eternity.  Or at least until some property developer turns the whole place into flats.

Tales of the Nightcomer– the Nightcomer, a vampire who has nothing to do with Scream!’s scariest strip, The Nightcomers, introduces a tale about a man, Henry J. Kessick, who bought some property on a sacred site and is looking to build a motel.

He goes to inspect his new purchase and finds a squatter there who warns him about the ‘Earth People’ and says that he is the last line of defence against them.  Henry kicks him out and plans a nocturnal feast at the site to prove there is nothing spooky about it.

This goes about as well as you’d expect and ends up with the Earth People rising from the mud and sacrificing Henry to a demonic cyclops thing.  The squatter returns to put things right and the site is conserved and kept as a tourist centre with him employed as a guard.

A Ghastly Tale – this unnamed Ghastly Tale is about Tom Bern, an actor who has failed another audition.  As he leaves, he’s run over by a taxi but apparently unharmed.  A man approaches with a red book under his arm.  Tom thinks he’s going to be on This Is Your Life but the man is a skeleton and it turns out that taxi did indeed kill him.

Monster – with Terry’s adventures now finished in comic form in Eagle, this text-only story gives him a new adventure with his friend Digger Muldoon in Australia.

The Scream Show – this story uses characters from last year’s It’s A Scream and continues with the childish humour and weak puns.

The Dracula File – Last year’s effort was inexplicably in Yorkshire but now Dracula is back in London.  After feeding on a busker, Dracula’s kill gets more press attention, alerting old foe Colonel Stakis to his presence once more.   He tracks him down to a train station and sees Dracula about to board a train carriage with a tramp alone in there.

Knowing the tramp will surely be killed, Stakis throws a stake at Dracula and wounds him.  In an effort to escape, Dracula turns into a bat but is helpless.  Stakis attempts to finish him off but the tramp stops him, thinking it really is just a helpless bat.  Dracula leaves on the train, escaping once more.

Demon of the Deep! – this unbranded Library of Death styled effort is about a man, Jeb Stone, working on a cargo ship.  On a previous voyage he saw his boat eaten by a giant sea demon and so is now quite superstitious and attempts to put up a horseshoe for luck.  His new First Officer, Dan Hardwick, is a prick though and doesn’t stand for superstition.  But when a storm threatens the boat, and destroys all but one lifeboat, Hardwick kills Stone and flees.

Time passes but when an albatross arrives, Hardwick thinks he can kill and eat it, but when it morphs into Jeb Stone and kills him, all hope is lost.  The other man in the boat, Phillips, survives and ultimately becomes Captain Phillips and insists on placing a horseshoe on every trip.

Give Me a Hand! – while not branded as a Ghastly Tale, this two pager follows a Frankenstein-style monster who is trying to get a new hand.  He goes to the hospital but they can’t help him.  He eventually finds a…. ugh… second hand shop.

Library of Death: Ghostly Games – A gambler, Allen, is trying to borrow money from his wife’s uncle, Randall.  He eventually gets the money but isn’t planning to use it for betting.  Instead he’s setting up a plan to frighten Randall to death (the now standard Library of Death trope).  He and two friends make a fake grave for Randall and plan to scare him using costumes.

However, on the day, Allen goes there to prepare and is besieged by actual ghosts who aren’t happy with him taking the piss out of death.  In an effort to get away, Allen falls and hits his head on the tombstone which then crushes him to death.  His body was never found but the gravestone had crumbled and spelled out his name instead.

The Nightcomer: Mother Haggard’s Helpers– the Nightcomer returns for a second tale.  He introduces Mother Haggard, an old woman who is fighting off an effort to evict her from her home.  A digger comes to life and starts attacking the construction workers but they keep pressuring her, even bringing the police and bailiffs.

They eventually get her out but she insists her family won’t let her end up in a home.  The whole family is dead, buried on the grounds.  But after a construction worker kicks over all their gravestones, and the bulldozers roll in, the dead Haggards rise from their graves and begin controlling all the vehicles, causing chaos.  They eventually build the motorway but detouring around the old house. 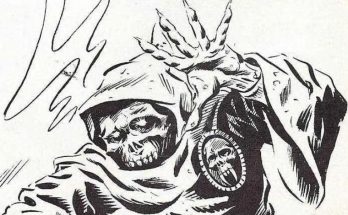 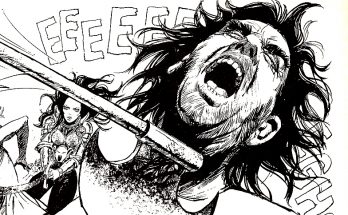 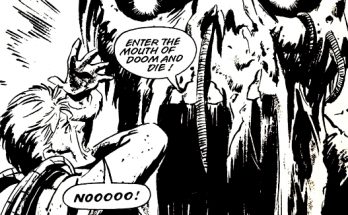