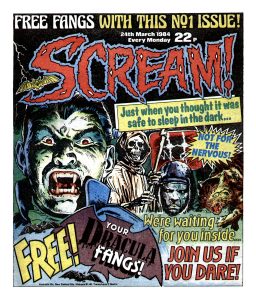 The first issue of the legendary UK horror comic Scream! was first released in March of 1984 following a short TV advertising campaign.  I was nine years old when it came out and was beyond excited to get it.  As was my best friend at the time too.   We reserved it immediately from our local newsagent.  As soon as we got our hands on this issue, we shoved in those free fangs and got reading.

Issue 1 cost 22p at the time but it perfectly trod the line between having legit horror chops and still being a comic for children.  We were, of course, obsessed with it.  And what would follow were fourteen glorious weeks, in the Spring and Summer of 1984, where Scream! would offer pure UK horror comic perfection.

The Dracula File – Dracula makes his way from behind the Iron Curtain in Russia, across Europe into the UK.  Leaving a trail of dead bodies for a vampire hunter to track.

Monster – Young Kenneth Corman relives some memories of his abusive father as he buries the man in the garden after he died visiting the attic.  The strip ends with Kenneth about to enter the attic for the first time in his life.

The Thirteenth Floor – We meet Max, the computer that runs Maxwell Tower, an experimental council block.  He and his controller, Jerry, look after the tenants who live there with Max helping them with everyday problems or entertaining the children.  However, when Mr. Kemp, a debt collector, starts bothering his tenants, Max decides to take matters into his own hands and takes the man to the thirteenth floor.  Which is a problem for Mr. Kemp because Maxwell Tower doesn’t have a thirteenth floor.  This would end up being Scream!‘s most popular, and famous, storyline.

Tales From The Grave ‘The Undertaker’ – An immoral undertaker, who isn’t against finishing off his clients, is propositioned to kill a rich man to help unlock an inheritance.  Oddly, two pages (out of three) of this story are in colour, the only colour pages inside this issue.

A Ghastly Tale – This one pager is about a man working as ‘The Face of Horror’ in a carnival where he appears to be a beast in a cage.  However, his mask reveals a surprising twist as it turns out his human face is the real mask.

Library of Death:  At Death’s Door – a child visits a fairground with his parents but they won’t let him go in the ghost house.  That night he is approached by a ghostly figure who takes him to a real ghost house full of actual horrors.  There he sees his parents enter the ghost house.  That morning he visits their room and sees them sat up in bed.  They too are ghosts now and they tell him he’ll be trapped in the house forever.  That is until he wakes up and realises it was all a dream.

Terror of the Cats – Allen Woodward, a reporter, begins investigating a strange pattern of vicious attacks by domestic cats.  He runs into a Dr. Ulrich Kruhl, an unpleasant scientist who is attacked by one of the cats but swears revenge as he returns to his lab.  The story ends with the cats returning to normal but with one of them heading to a children’s ward in a hospital.