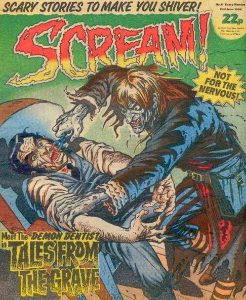 After a fairly tame issue 10 (in terms of kills), Scream! gets its hands bloody again this week.  Tales From The Grave gets the cover feature while the back cover is devoted to some fan art as Lee Williams from Gwent attempts to guess what Ghastly McNasty looks like.

This week Dracula terrorises London’s homeless community, Max plays fast and loose with health and safety on the thirteenth floor of Maxwell Tower, a house gets very angry at Beth Rogan and Terry kills a couple of Scottish guys.

Library of Death rocks out, Tales From The Grave wraps up its latest three story arc and we get the worst Ghastly Tale yet.

Elsewhere, Dracula’s remaining slaves sort out some accommodation for him in a derelict building.  Dracula decides to have a pre-bedtime feast on some local tramps but finds their alcohol-tainted blood to be a problem.  He then kills a man who is campaigning against the evils of alcohol and returns to his coffin.

Monster – As press interest grows in their story, Terry and Kenny arrive in a delivery yard in Aberdeen.  They are discovered by two workers who immediately set about attacking Terry which doesn’t go at all well for them.

After Terry kills both men, Kenny tells him that they have to find a doctor who can help Terry but they are still a hundred miles away.  After they leave, the grisly scene is discovered.

The Thirteenth Floor – Having injured one of Max’s tenants due to some shoddy plumbing work, Mr. Hamish Campbell and his assistant Trev found themselves on the thirteenth floor beset by floods, fires and all sorts of building hazards.

As the fire threatens to consume them, they attempt to flee but the whole place is a death trap.  A lesson to them in what happens when you don’t follow regulations.  However, when Max gets a phone call telling him that the tenant is now in a stable condition, he decides that he won’t kill the men and lets them go.

Tales From The Grave ‘A Fatal Extraction’ – Having murdered rich client George Makepiece, Thomas Thorpe, an evil dentist, is shocked to find that Grimes, his associate, has been killed and that Makepiece is back from the dead.

Thorpe escapes and returns to his dental practice but when he arrives Makepiece is waiting for him.  Grimes also returns, he too is undead and he forces Thorpe into his dental chair and extracts one of his teeth.

Makepiece tells him this pain is trivial compared to the pain he’ll feel when he gets to hell and dispatches him.  The story ends the gravedigger telling us that Thorpe’s body was never found and so he was never buried.  Bleak.

Library of Death:  Ghost Dance – The Downtown Freaks, a rock band with a costumed horror gimmick (a sort of proto-Slipknot if you will), are on stage in front of their adoring fans.  Afterwards the singer, Nick Nasty, is being a twat and telling the rest of the band that he’s the real star and that they’d be nothing without him.

Despite that, the band go to film their next music video in a supposedly haunted house.  During the shoot, Nick is impressed by two ghostly dancers but afterwards the band reveal that there were no dancers and when Nick reviews the footage he realises they really were ghosts.  His hair goes white, which is interesting because it is dyed green, and he freaks out.

A Ghastly Tale ‘Behind the Door’ – The weakest Ghastly Tale yet, this one  features a boy at a door.  There is steam piling out of the doorway and as he approaches nervously two hands grab him and tell him he has to go in.  When he does it’s just his mum telling him he’s got to have a bath.

The Nightcomers – Thankfully after that bullshit, The Nightcomers is here to end the issue on a scarier note.  Beth is in the house and testing her psychic abilities against whatever malevolent force is in there.  She leaves to find Rick, who has been knocked out by Simon Cutler and his associate, Aldo.

Cutler decides to burn Rick alive but messes it up and burns Aldo instead, who then falls in a well for good measure.  Beth finds him and they attempt to stop the flames from burning the house (for some reason) but as Cutler attempts to escape his way is blocked by a ghostly figure.