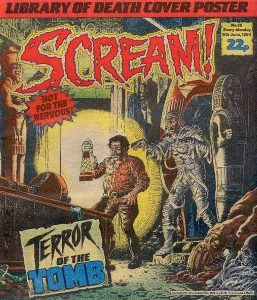 This week’s Library of Death story gets the front cover treatment and it even wraps around to the back cover too (although all the good stuff is on the front half).

This week Dracula climbs into a postbox to kill someone, Beth Rogan keeps matching wits with an evil house, Max continues to play with his food and Kenny manages to get shot.

Tales From The Grave sets up another morality tale with an ending you can see coming a mile off, Library of Death serves up a decent mummy horror story and A Ghastly Tale manages to not be entirely terrible this week. 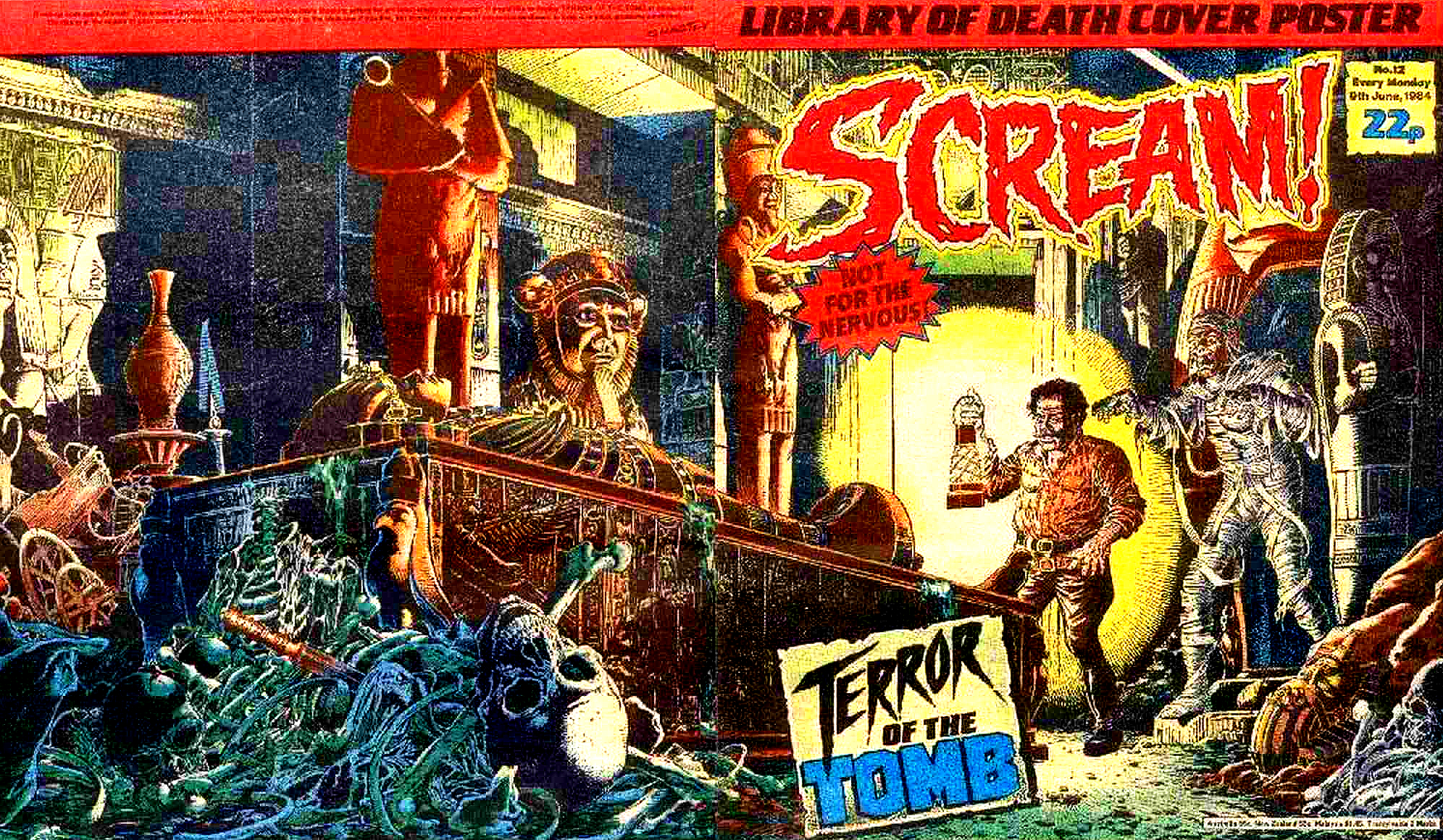 The Dracula File –  Dracula wakes up for another evening of killing and makes his way onto a bus where he kills the ticket inspector (remember those?).  Agent Stakis continues to hunt for him and Dracula catches a whiff of garlic and realises that he is still being hunted.

Outside, Dracula’s slaves patrol the area, looking for threats.  They accidentally target the wrong man who is then killed by Dracula in one of the great scenes in the whole storyline, but Stakis evades his pursuers for now.

The Nightcomers – As Cutler tries to escape, he runs into a ghost (who turns out to be ‘Edna,’ someone he’s responsible for the death of).  Unable to leave he keeps an eye on Beth and Rogan, who he realises must be the kids of the couple he had served up to Raven’s Meet, the haunted house and the centre of all of this.

After stopping the house from catching ablaze, Beth and Rogan enter Raven’s Meet looking for the source of its power.  However, this episode ends with a disembodied hand chasing after them.

The Thirteenth Floor – A family arrives at Maxwell Tower expecting to move in.  However, a mix up with the council has meant that they now have nowhere to live.  Even though they aren’t tenants, Max is pissed off and decides to invite the man responsible,  Mr. Bullock, to a meeting.  On the thirteenth floor.

This all plays out as an ‘out at sea’ allegory with Bullock trapped on a raft that is breaking apart.   Things get worse when we see that there are sharks on the way too.

Tales From The Grave ‘The Escape’ – Tales From The Grave starts a new anthology series which features Billy White, a dishonest undertaker’s apprentice, who is working for the equally unscrupulous Jeb Morgan.  A female cadaver is brought in and Billy goes to steal the rings on her fingers.  Jeb gets there first though, leaving Billy quite angry about the whole thing.

Months later, the corpse of a wealthy American is brought in and is due to be shipped back across the ocean.  Billy seeing his chance decides to prep the man’s coffin and then kills Jeb, throwing him in the cellar.  He then gets into the specially prepared coffin with Jeb’s stolen riches.

You’d think that literally losing the boss would probably delay the coffin getting shipped, but let’s not get caught up in the details, people!

A Ghastly Tale ‘The Final Cut’ – After last week’s effort, anything would be an improvement and this one-pager gets to the point pretty quickly.  Film set.  Hunchback.  Man climbing rope.  Director yells ‘cut.’  Hunchback cuts rope.  Man falls to a probably death.  It’s a simple pun and the page layout kind of spoils the punchline immediately but it’s okay.

Library of Death:  Terror of the Tomb – A standard ‘Curse of the Mummy’ effort, this story features an archaeologist, Blake, who is searching for a man who went missing during an expedition in Egypt to the tomb of Ka-Rey.   He arrives at a mummy’s tomb and finds the man’s body in a sarcophagus with all indications showing that he was buried alive.

He doesn’t need to guess who is responsible because a mummy comes leaping out after him, chasing him across the tomb, eventually catching him.

Twenty years later, another adventurer sets out looking to solve the mystery of Blake’s disappearance.  However, a sarcophagus in the tomb already has this new man’s name etched on it.  It’s fairly predictable stuff but the intricate artwork is excellent!

Monster – In the Scottish wilderness, Terry and Kenny camp down and get some sleep, only to be disturbed by a poacher who rather unwisely decides to get on Terry’s bad side.  Things get even worse when the poacher accidentally shoots Kenny, prompting Terry to forcibly turn the gun back on the man and kill him with it.

They ride off on the poacher’s bike but eventually Kenny’s wounds get the better of him and he collapses.  Terry carries him to a nearby house but as they enter the grounds, two guard dogs attack.