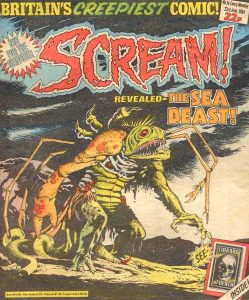 Scream! issue 14 gave last week’s Library of Death creature its big reveal on the front cover.  This seafood medley on legs definitely looked pretty fearsome and contributes to a thrilling finale for this two-part story.

The Nightcomers offers a cautionary tale about why you shouldn’t worship demons and kill your wife,  Max attempts to rehabilitate a young vandal, a new Tales From The Grave starts with a suspiciously Frankenstein-esque tale, two policemen find out that trying to stop Terry is a lot harder than they imagined and Dracula continues reminiscing over the events of 1892.

This week’s Ghastly Tale is a simple but effective affair too, making this a good issue overall.

The Nightcomers – Rick and Beth awake tied up and ready to be sacrificed by Simon Cutler who reveals how Raven’s Meet, his home, became a hub for demonic evil.  He explains how he began dabbling with demonology out of boredom (motherfucker, it’s 1984, buy yourself a ZX Spectrum or something) and accidentally killed his wife, Edna.

None too impressed, Edna then began haunting Simon before becoming something of a conduit to the demon Baphomet.  He then contacted Rick and Beth’s parents to come and exorcise the house but they came a cropper.  So now, in a last effort to appease Baphomet, he decides to sacrifice the Rogans.

Library of Death:  Sea Beast – Professor Ross and Inspector Coal confront the Sea Beast.  It doesn’t go all that well and Ross gets injured but the beast is accidentally shocked by a electrical device and retreats into the sea.  The men decide to leave and form a plan.

They decide that an anti-radiation agent is needed clear the water and kill the beast.  Ross goes back to the water and begins the process but is attacked once more.  A struggle ensues but he is able to inject the agent into the creature’s mouth which kills it.

Later, they announce that the water is now safe but it turns out that traces of the original pollution still exist and when one kid swallows some water his hand begins to mutate immediately suggesting that things aren’t going to be okay after all.

The Thirteenth Floor – When a youth calling himself Cheezy arrives at Maxwell Tower and starts tagging graffiti everywhere outside, Max takes matters into his own digitised hands.  He hypnotises Bert Runch and gets him to apprehend the youth.  Max, of course, takes him to the thirteenth floor.

As Cheezy steps out of the lift, he finds himself dangling from the top of the Empire State Building.  Max tells him to continue tagging his name but as he does Cheezy falls, catching onto a flagpole.  This installment ends with the flagpole breaking and Cheezy falling towards the ground.

A Ghastly Tale ‘The Man They Called Doctor Death’ – A coachman called Wenlock is making deliveries in the evening on his horse-drawn carriage.  He’s going too fast and eventually crashes.  A doctor, Phillary, attends the scene.  Wenlock has been crushed to death but the doctor is more interested in his arm which is undamaged.

He goes to amputate it but is stopped by a policeman.  Frustrated, Phillary leaves and returns to his lab where he is attempting to reanimate the dead.  However, his subjects are never fresh enough and so the experiments always fail.

Undeterred, he goes off and hires two young men to work for him.  Their job is to dig up corpses.

A Ghastly Tale ‘Dumb Animals’ – Matt Forster, a trophy hunter, is indulging in a bit of animal killing in a game reserve while the wardens are away.  His wife asks him to change his ways but he sees his quarry as just being “dumb animals” and isn’t interested in stopping.

The next day he sees a host of animals all lined up waiting to be killed.  He puts a bullet in each one but finds that they are wooden decoys, a trap set by Oggskirt, an alien who is out hunting humans.

Forster’s head ends up as a trophy on his wall.

Monster – Terry and Kenny get about 50 metres down the road before crashing their bike in front of the police who, rather unwisely, attempt to apprehend Terry.  This goes particularly badly with Terry knocking one unconscious and the other one’s car over a cliff with him still in it.

The two policemen live though and when Terry and Kenny find themselves at the end of water, they head towards a village in an effort to hire a boat to continue their journey.

The Dracula File –  Dracula continues reminiscing over the events of 1892 when he was challenged by a vampire hunter, Quinn, and his giant servant Carl.  The two men arrive at Dracula’s castle, initially as guests but when Carl is taken to the servant quarters, Dracula’s slaves attempt to kill him, which doesn’t go well at all as Carl is much stronger than they imagined.  One is thrown out of the window while the other, definitely a vampire, gets staked.

Elsewhere in the castle, Quinn confronts Dracula, and subdues him with a cross before Dracula’s butler intervenes.  Quinn reveals that he is there for revenge after Dracula turned Quinn’s wife into a vampire.  He then tells him that he will suffer the same fate. 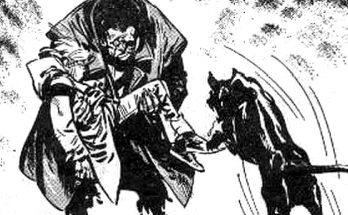