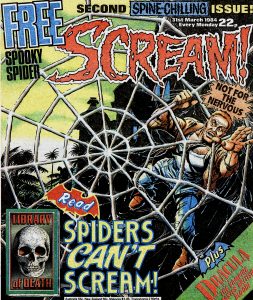 While issue #1 is a classic, it was Scream! comic issue #2 where some of that exposition would start to turn into some actual scares.  We got to meet Uncle Terry, the man that Monster got its title from and Max, from The Thirteenth Floor, would get the first of many kills.

Elsewhere, the other serialised stories began to hit their stride while the standalone stories were particularly effective too.  This issue also came with a toy spider to commemorate John Agee’s excellent ‘Spiders Can’t Scream’ which was this issue’s Library of Death offering.

Again, most of this issue was printed in black and white with only Tales From The Grave getting any colour and even then only for two pages which would be continued in every issue of Scream!

The Dracula File – Dracula infiltrates an MI5 safe house and creates his first servant as he establishes himself in England.  This story has some particularly excellent art by veteran artist Eric Bradbury.

Monster – With both his parents dead, Kenny looks in the attic and sees a monstrous looking man there.  Out of desperation, Kenny knocks him out with a spade but then learns, from a letter from his mother, that the monster is his Uncle Terry and is now his responsibility.

The Thirteenth Floor – Max takes Mr. Kemp, a thoroughly unpleasant debt collector, to the thirteenth floor where he is put in a maze and chased by debt collectors in some sort of twisted version of Pac-Man.  He is eventually caught and killed.  Later we see his body in the elevator and it appears that he has died of a heart attack brought on by sheer fright

Tales From The Grave ‘The Undertaker’ – In the last issue a rich heiress is trying to speed up the process of getting her inheritance by asking an undertaker to kill her uncle.  In this issue, we see them hatch a plan to scare the old man to death by realising his worst fear and trapping him with some very carnivorous rats.

Library of Death:  Spiders Can’t Scream – A professor undertakes an archeological expedition to a mysterious temple.  However, where his intentions are purely academic, Cordwell, one of his party, is more interested in treasure and when riches are found, he murders the whole expedition.  However, he becomes trapped in a web which is home to an enormous spider.  He wakes up to find that the spider’s bite isn’t fatal but rather a curse that will see him trapped in the spider’s form for centuries.

Terror of the Cats – Reporter Allen Woodward,  saves a child from being attacked in hospital by a cat.  Hospital security attempt to detain him but he escapes by hiding in a cupboard.  Unfortunately for him, the cat that he fought off earlier is in there and attacks him.

A Ghastly Tale – After the previous issue’s one-page tale, this week’s effort offers up two and a half pages of tree-based horror as a mix-up with some chemicals in an orchard creates a killer tree that starts devouring picnickers.