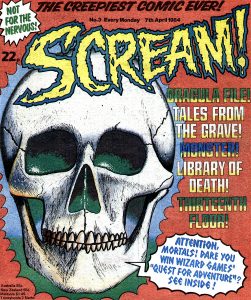 Issue three of Scream! with its iconic skull cover remains one that is burned in my memory.  Sure, the free gifts had dried up by the time this one hit the shelves but that cover was pretty hardcore for what was essentially a child’s comic and I loved it.

As for the issue itself, Scream! had settled into its stride by now.  The Thirteenth Floor had established a pattern of setting up a bad guy in one issue and offing him in the next while the other serialised stories had started getting interesting.

The standalone stories (Ghastly Tales and Library of Death)  in this issue were pretty good although one of them was a straight ripoff of a story from the 1983 horror anthology film Creepshow.

The Dracula File – Dracula continues his murder spree before being trapped in a room by an MI5 agent.  However, it soon becomes evident that Dracula has a few tricks up his sleeve when he escapes the room by turning into smoke.  That’s the good thing about The Dracula File, it sticks to the traditional aspects of vampire stories.

Terror of the Cats – Reporter Allen Woodward fights off an attack by a cat while hiding in a hospital.  As hospital security attempt to detain him, they realise that a large group of cats is outside.  Woodward makes a break for it and heads to the laboratory of Dr. Kruhl.  However, when he gets there there are even more cats waiting for him.

The Thirteenth Floor – Following the death of Mr. Kemp, the police investigate but close the case.  That night, two skinheads chase a resident into the building.  Max takes them to the thirteenth floor and this time themes it around the thugs’ spider tattoos.

Tales From The Grave ‘The Undertaker’ – In the last issue Joshua Sleeth, the evil undertaker, attempted to kill a man by scaring him to death.  However, in this issue the man jumps into a river to escape.  Assured that he’d be dead, Sleeth tells the man’s niece (who ordered the killing of him) that he’s dead.  However, it becomes apparent that the man he attempted to kill wasn’t her uncle.  Things get worse when the man, looking very worse for wear, arrives at his business.

Library of Death:  The Drowning Pond – A boy is apparently pulled to down into the water by a skeleton in a pond.  We learn that this pond is where a suspected witch was executed 300 hundred years before.   The boy’s father discusses it with his doctor and they decide to investigate.  While there, the skeleton appears to attack him too.   They put it down to the movement of the water but the boy asks why the roses in the skeleton’s hair are still fresh.   Oooh!

A Ghastly Tale – A boy recounts the story of what happened when he touched a meteorite and found that everything he touched started sprouting leaves.  A straight rip of ‘The Lonesome Death of Jordy Verrill’ from Creepshow (1982) but an effective one-pager nonetheless.  Tragic ending too.

Monster – Kenny reads more about his monstrous-looking Uncle Terry from his mother’s letter and goes back up to check on him.  Terry attacks him but Kenny is able to tell him that he’s his friend.