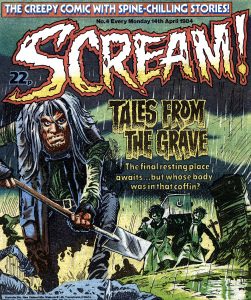 Issue four of Scream! features Tales From The Grave on its front cover which at the time wasn’t a massive selling point for me as I never used to read it.  Odd to think that in a comic with just 31 pages (not including covers) that I’d completely skip one story.  Anyway, its four-issue first story arc came to a satisfying end in this issue.

We’ve also got The Dracula File ramping up,  Max seemingly going after everybody in The Thirteenth Floor, a very creepy Library of Death effort and plenty of other stories to get your teeth into.

The Dracula File – After turning into smoke to escape a room, Dracula enslaves the MI5 agent that trapped him. We also see him turn into a bat as he flies off looking for someone to feed on.  He ends up going to a cinema (showing a vampire film) that is full of potential victims.

Library of Death:  All Done With Wires – Cyrus Doone, a con-man posing as a medium is ripping off clients (like all psychics do) by pretending to get them in touch with their dead loved ones.  It is revealed that the spooky theatrics are all electronic effects created by his partner Farley.  However, when an investigator rumbles their operation, Doone kills her but is then trapped by vengeful spirits who then kill him.

The Thirteenth Floor – Having taken two skinheads to his thirteenth floor, Max sets about driving them mad by setting a lot of spiders on them.  However, once he releases them from the building, a family of residents begins burgling other families.  Max isn’t a fan of this and once they set foot in his elevator we know where they’ll be in next week’s issue.

Tales From The Grave ‘The Undertaker’ – It is revealed that the man Sleeth attempted to kill was his client Elizabeth’s boyfriend, Clive Bentley.  He had attempted to create an alibi for poisoning her uncle by dressing as him and going out.  This leads to a confrontation and Clive kills Sleeth.  Everyone goes to jail and Sleeth goes to the grave.

Terror of the Cats – Allen Woodward makes his way to Kruhl’s lab while the hospital is attacked and a nurse, Jim Warden, wonders if Kruhl has sent the cats to kill him after he helped him.  Woodward makes his way into the lab but runs into some real trouble.  After three issues of kicking the shit out of domestic cats, now he’s trapped with a leopard and a lion.

A Ghastly Tale ‘Mirror Mirror’ – Two skinheads (poor old skinheads get a rough deal in this issue) go into a hall of mirrors at a fare but they get more than they bargain for when they come out but now look like their crazy reflections.

Monster – Kenny manages to befriend his Uncle Terry but when a debt collector enters the house, looking for money from Kenny’s dead father, Terry rushes to protect his nephew and starts throwing the debt collector around in a fit of rage.