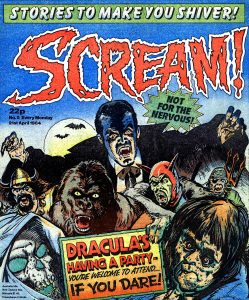 Issue five of Scream! features Dracula and a cast of other monstrous figures.  This relates to the latest installment of The Dracula File where our favourite villain ends up at a fancy dress party.

Elsewhere we get the usual assortment of stories from The Thirteenth Floor, Terror of the Cats, Monster and the rest.  However, Tales From The Grave began a new story and this issue is notable for having the worst Ghastly Tale in the history of the comic.

The Dracula File – After murdering someone in a cinema, Dracula flies off and ends up at a costume party where he remains undetected despite casting no reflection in a mirror.  He leaves, killing one of the partygoers before fleeing in a taxi.  At this point it becomes apparent that the crazy bastard just wants to kill everybody.  We did appreciate them throwing in the mirror thing though as it shows how much of the traditional vampire lore they were prepared to use.

Monster – Terry manages to kill the debt collector who was terrorising his nephew Kenny.  In a scene that would be mirrored by Terminator 2 years later, Kenny tells him that murder is wrong and sets him down in front of the TV to chill him out.  However, a social worker turns up looking for Kenny’s father and Kenny has a choice to make.  Do they stay or do they go on the run?

The Thirteenth Floor – Max has enough of The Fogarty family and gets the two sons into the elevator and into his thirteenth floor which he has turned into a thieves’ graveyard.  However, the bodies are still restless and start attacking the two men.  One accidentally shoots the other who then retaliates.   However, to the Police it just looks the two of them shot each other in the lift and they make an assumption that the two fell out over loot.

Tales From The Grave ‘RIP Willard Giovanna’ – Our host, the gravedigger, begins a new tale about Willard Giovanna, a man who has been buried in a cematery by another gravedigger, Finley.  One day a man comes to see the grave and bribes Finley to allow him to dig up the grave.  He returns later on and as the man begins digging, Finley notices a name tag in his coat and realises that the man is in fact Willard Giovanna and is digging up his own grave.  I mean, you’d really just guess that he’d stolen a dead man’s coat.  But whatever.

Library of Death:  A Break in the Country – Two days after a meteor storm, young Tony Crabtree takes a train to go and visit his Aunt Betty in the country.  He’s been stuck in the house for a while with a broken leg and is keen to get a change of scenery.  When he gets there he notices a lot of people also have limbs in plaster casts.  Then he is taken to a village meeting where it turns out that all the villagers are actually aliens and their casts are hiding insect-style limbs.  He then wakes up in hospital thinking it was all a dream.  At least until the doctors turn out to be bastard alien insects too and when they take off his cast his leg is now an insect limb too.

A Ghastly Tale ‘The Nightmare’ – A psychiatrist is with a client who has been struggling with a nightmare where he falls over and breaks all his bones.  It turns out he’s Humpty Dumpty.  This story is bollocks.

Terror of the Cats – After being trapped with a leopard and a lion, Allen Woodward is rescued by two guards but it turns out they work for Dr. Kruhl, the weird scientist who seems to be behind the recent spate of cat attacks.  They take him to the man himself and that is where Woodward finds out the truth.  Kruhl has constructed a giant brain that can control all the cats.

Hi! If you fancy chipping in a little to help keep this site running, then we'd appreciate it but otherwise just enjoy the site. It's all good!

[…] issue #1 is a classic, it was Scream! comic issue #2 where some of that exposition would start to turn […]