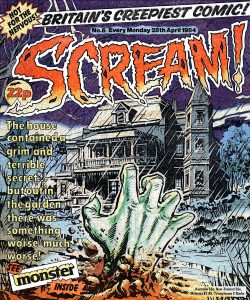 The cover from issue six of Scream! gives top billing to Monster but is somewhat misleading, making the reader think we’re in for some legit zombie action.  I certainly fell for it at the time (fun fact:  my newsagent didn’t get this issue in on time but I ended up reading it in the waiting room at my local dentist).

This issue is notable as it brings two stories to an end.  Anthology series Tales From The Grave’s current story gets wrapped up after just two issues while Terror of the Cats gets its own finale after its six issue run.

Elsewhere, Dracula continues murdering basically everyone he sees, Kenny and Terry’s bad week gets even worse, Max continues to cover up his own murder spree and the two standalone stories provide mixed results with Library of Death delivering a corker but Ghastly Tale under-performing once more.

The Dracula File – Dracula starts this issue as he means to go on by killing a woman and a taxi driver in the first couple of panels.  He returns home just before the sun begins to rise.  His slaves were worried but Dracula’s getting pretty cocky right now.  However, he does end up on the radar of the KGB’s Colonel Stakis,  This episode ends with a group of men (Police?  KGB?  Locals?) breaking into the safe house after noticing the recent suspicious activity.  Dracula is in his coffin but we see his white eyes light up and so they’re probably all going to be added to the bodycount in the next issue.

Monster – After a day of burying dead folk, Kenny heads off to bed.  Uncle Terry goes to his attic, unwilling to sleep in any other room.  That night Kenny has a nightmare and is woken when Terry smashes through his door thinking he’s in danger.  The pair have bonded.   However, things are about to go from terrible to really terrible as the two dead bodies in the garden become dislodged by a flood and start rising from their graves.

The Thirteenth Floor – The police begin looking a little closer at the events at Maxwell Tower as the bodies start piling up.  However, Max uses a little bit of computer wizardry to fake some footage of his recent kills (well, assisted kills).  However, he’s soon back at it when a bailiff, Mr. Cawber, starts hassling two of Max’s elderly residents.  Cawber soon finds himself on the thirteenth floor where he meets the ‘Bailiff of Death’ who examines him Judge Death style, and declares that Cawber has no heart.  Throw in a few creepy skeleton nurses and it looks like issue seven is going to be a bad one for Mr. Cawber.

Tales From The Grave ‘RIP Willard Giovanna’ – Last week Finley, a grave digger, was asked by a man to dig up the grave of one Willard Giovanna.  That episode ended with Finley realising the man was Willard Giovanna.  In this issue, he finishes the task, opens the coffin and finds a letter that addresses him.  Reading it, the letter asks Finley to look after the otherwise untended grave and when he looks around he sees that Willard is now a corpse.   Freaked out, Finley begins tending to the grave, receiving money each month to do so.

Library of Death:  Death Road! – A hitchhiker on his way to Leicester flags down a driver.  However, once in the car he vanishes.  The car crashes, killing the driver.  Later we see him to do same thing again (this time turning into a weird Nosferatu-style figure), killing a truck driver this time.  However, when he goes to pull the same trick a third time, the driver begins to vanish.  The end up in another dimension, where the driver tells him that the lords of the spirit world aren’t too happy with him.

It turns out that the hitchhiker was killed in a road accident one night after nobody stopped to pick him up and has been punishing drivers ever since.  He then returns to the roadside once more but the next driver to stop is a demon who informs him that the next stop is hell.

A Ghastly Tale ‘That Sinking Feeling’ – We see a main floating on a plank of wood.  He’s wondering what went wrong after he’d managed to pull of the perfect robbery.  With a lot of loot, he had gotten onto a boat headed for America.  The problem is that that boat was The Titanic and he wasn’t going to be getting away after all.

Terror of the Cats – After finally seeing the giant brain thing Dr. Kruhl had created to control all the cats, Woodward rushes up to a platform looking for a way to stop it.  Kruhl follows him up there and attempts to shoot him (although weirdly the brain warns him in advance but this is just bad writing).  The gun jams and the two men struggle before Kruhl falls into the brain which kills him and… er… causes the brain to explode.  Finally ending the terror of the cats.

The whole story is covered up by the government but Woodward does receive a present from a friend.  A kitten in a box.  Aww!