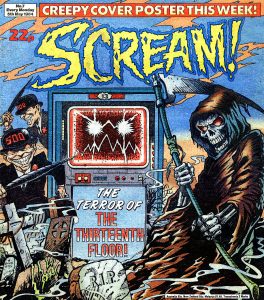 Max, from The Thirteenth Floor, is the cover star of Issue 7.  The previous six issues’ back covers formed a larger poster piece but this issue’s cover was a wraparound image that crossed over onto the back page.

The big news with this issue was that Terror of the Cats was no more and was replaced by the much harder hitting Nightcomers (which recently got a convenient reprint as a bonus supplement in the 2000 AD Megazine).

A great Library of Death effort is the star of the show here though but we also get a good Ghastly Tale (not always a given) while The Thirteenth Floor, Dracula Files and Monster are all on good form too.  This is certainly one of the best Scream! issues.

The Nightcomers – A couple, Anne and David, are killed by a malevolent force that inhabits Raven’s Meet, a seriously haunted house.  Later their son and daughter, Rick and Beth, are drawn together having felt their parents’ death.  It turns out the parents hosted a psychic stage show but were also legit paranormal investigators.

They left a tape behind with a message to Rick and Beth explaining that they were hired by a man, Simon Cutler, to investigate Raven’s Meet and that they need them to close the case for them.  Elsewhere, we see Cutler in the house revealing that he set Anne and David up.  The house sets a hell hound on him because the house is a dick.

The Thirteenth Floor – The Bailiff of Death decides that if Mr. Cawber has no heart then he should be able to donate all of his blood.   He is strapped down and just as the operation is about to take place he is suddenly back in the lift, scared almost to death.  Left alive but in no fit state to explain what happened, Cawber is let go.  However, Police Sergeant Ingram begins to get even more suspicious of Max.

He goes back to the office to review the footage of the Fogarty shoot out that Max provided and spots a detail that makes him think Max faked the whole thing.

Library of Death:  The Punch and Judy Horror Show – Punch and Judy had been used for a horror tale in the film Screamtime (1983) and this riffs on the same concepts.   With puppet operator Freddie Fresco seen performing a show.  Afterwards he laments on just how much he hates his job.

After giving the puppets a bit of a kicking, Freddie is visited by his manager who informs him that he’s closing down his show.  Freddie twats him with a wooden plank, killing him in true Mr. Punch style and then hides him in his puppet case.

That night he wakes up with his Punch and Judy puppets on his hands.  They saw the murder and are here to punish Freddie.  They make him walk to the beach where he performs his show and the next day we see the children enjoying another performance.   But a week later two men find his body and it looks like he’s been dead a very long time.

Tales From The Grave ‘The Cabbie and the Hanging Judge’ – The grave-digging, leper host of this anthology introduces a new tale.  Stanley Stubbs is a cabbie who finds himself in court, facing Judge Irving Benson who is known for giving the harshest sentences possible.

Stubbs is accused of killing a passenger, a crime he is innocent of.  Benson isn’t hearing any of it and sentences him to hang.  Stubbs swears revenge and writes a letter for Benson before being executed and buried in the prison grounds.

Monster – With the graves of Terry’s first two victims disturbed by a flood, Kenny decides they need to go on the run.  The next day a social worker finds the bodies and Terry’s secret existence is revealed.

With the Police searching for them, the pair hide out in some wasteland populated by tramps.  However, when a couple of tramps try to rob him, Terry gets in one of his moods and grabs one of them by the throat.

A Ghastly Tale ‘Young At Heart’ – Two scientists, who have worked together for years, finally create a youth serum.  However, one of them, Silas, decides he wants all the profits and kills his partner before taking the serum.  But he misjudges it and ends up being six months old.  A bleak death sentence given that he’s in a locked laboratory.  Finally, A Ghastly Tale is back on form.

The Dracula File –  As MI5 agents (it wasn’t clear in the previous issue) raid Dracula’s new home, his slaves put up a fight which allows him to turn into dust and escape.  The agents take his coffin away, creating something of a problem as Dracula must sleep in the native soil that the coffin contains or he’ll die.  They ship out in a convoy with decoy vehicles.

Back in Russia the KGB’s Colonel Stakis, is convinced that the killings in England are the work of a vampire.  His bosses disagree and decide that he is unfit for duty and attempt to detain him.  He escapes with intentions to cross the border.

The story continues in England with Dracula tracking down the convoy in wolf form much to the delight of his slaves.