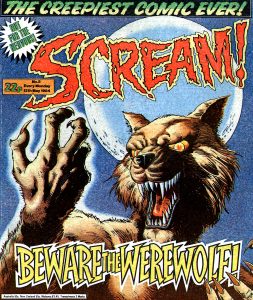 This week’s Library of Death story gets the front cover slot with a werewolf story while the back cover is given to Ghastly McNasty, shown editing the comic in depths of King’s Reach Tower.

Elsewhere, Dracula who is basically a bat-shit crazy psychopath, gets more kills,  Max has another run-in with the police before going to great lengths to hunt down a man who runs over a dog, the latest story in the anthology series ‘Tales From The Grave’ comes to a satisfying conclusion and things go from even worse to straight up awful for Terry and Kenny.

The standalone stories are a mixed bag with Library of Death offering yet another good one but this week’s Ghastly Tale has a weak payoff.

The Dracula File –  Dracula descends on the convoy that is shipping out his slaves and coffin.  He goes into his wolf form and kills everybody of course, including a nice scene where he takes out a motorcycle cop too.

Over in Russia, Agent Stakis evades capture and crosses the border on his way to the West to try to stop Dracula.  He’ll need to be quick though as Dracula has moved to London and has a city full of potential victims to gnaw on.

The Nightcomers – Simon Cutler manages to kill the hell hound that Raven’s Meet has set on him and escapes the house.  Meanwhile, Rick and Beth agree to investigate the house and their parents’ deaths.  The house immediately tries to kill them by dropping a statue towards them but Beth’s previously unrealised psychic talents help her to evade the threats but this installment ends with burning ghostly footprints heading towards them.

A Ghastly Tale ‘The Pharoah’s Curse’ – A tour guide at Tutankhamen’s tomb is telling a group about a curse when two boys in the group try to slip away and look behind a closed door.  As they do, a dog jumps out and scares one of them, making him collapse with shock.  Someone in the group says it must be the curse but the guide reveals that this is a staff only door and the hieroglyphic sign translates as ‘beware of the dog’ which is pretty lame.

The Thirteenth Floor – Having found an inconsistency with Max’s footage of the Fogarty brothers’ shoot out, Sergeant Ingram returns to Maxwell Tower to interrogate Max and his controller, Jerry.  Max resists the urge to serve him up a peasant’s death in the thirteenth floor and is able to correct the footage on the fly, making Ingram doubt himself.

Max resolves to be more careful in future but when a man, Mr. Nelson, runs over and almost kills a puppy belonging to one of Max’s residents, it isn’t long before Nelson finds himself on the thirteenth floor which is now a giant motorway.

Tales From The Grave ‘The Cabbie and the Hanging Judge’ – After being executed by Judge Benson, Stanley Stubbs’ revenge plan begins as a letter he wrote is delivered to the judge.  He is swearing revenge but Benson isn’t bothered, he gets a lot of those kind of letters.

However, when the judge later gets into a cab, he is shocked to find that Stubbs is the driver and in a panic he jumps out and gets killed in the road.  It turns out though that this was Stubbs’ plan and that it was his twin brother who was now hounding Benson.

Later, Stubbs is exonerated of the crime he was executed for and his body is moved to a proper graveyard where is buried next to Benson.

Library of Death:  Beware the Werewolf – After a string of brutal werewolf killings, a police inspector begins to inspect Edmund Varley who was known to be in all of the areas where the killings took place.   However, Edmund is actually out to find the killer himself and heads out with a rifle.

His son calls the Inspector, telling him that he’s worried about his father, but when the Inspector gets there he is attacked by the werewolf and killed.  Edmund arrives and goes to shoot the werewolf but is overpowered.  The story ends with the wolf transitioning back into a human with his hand around Edmund’s neck at which point he says “hello, Father.”

Monster – After being disturbed by two tramps trying to rob them, Terry beats the hell out of them but Kenny intervenes, stopping his uncle from killing the men and allowing them to escape.

Back at Kenny’s house, the police have found the bodies in the garden and have begun a manhunt for Terry, having decided already that he’s an evil killer.

Elsewhere, Kenny and Terry find a hut and hide out for the night but outside the police are on their trail and send in the dogs to find them.