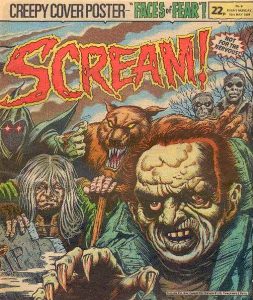 Readers were treated to another wraparound poster cover which gave equal billing to a lot of regular characters, and a few Library of Death ones too.

Inside this issue we got the usual stories with Dracula continuing to kill literally everyone while Max showed what a friend he was to puppies where as Terry found that he probably wasn’t a dog person.

Tales From The Grave started a new story, this time featuring a dentist who turns out to be a total prick.  While the two standalone stories did continued the usual pattern with Library of Death being good and A Ghastly Tale being a bit average. 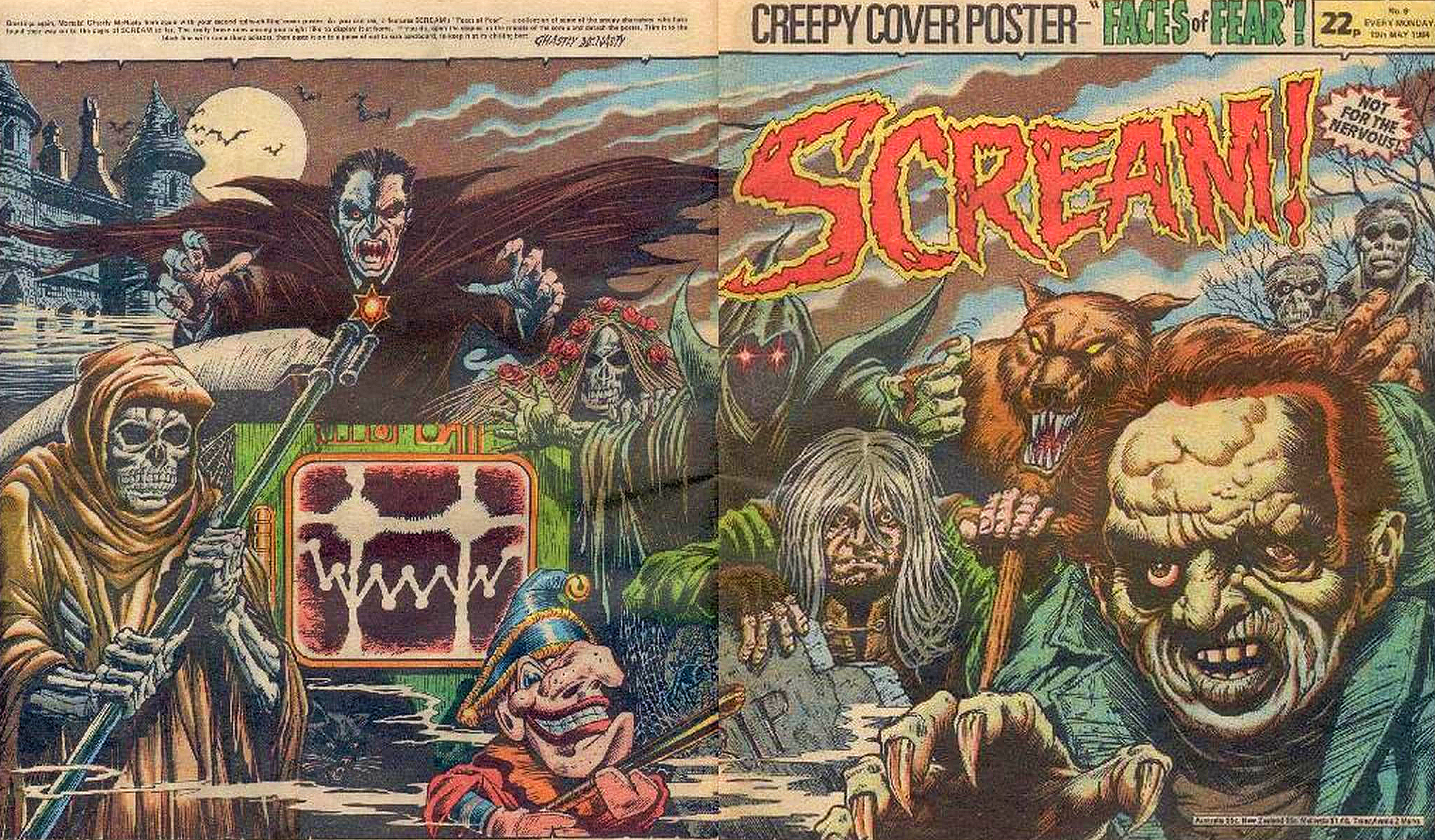 The Dracula File –  Dracula wakes up after a night of killing absolutely fuming that his slaves had put his native soil in a bathtub.  He goes out for a few more kills and finds a young man being attacked by a couple of thugs.  After killing one thug with a swipe to the throat, he then feeds on their victim.  The other thug survived Dracula’s first attack and suitably impressed, Dracula decides to turn him into a slave.

Elsewhere, Agent Stakis from the KGB is preparing a vampire kill kit full of stakes, garlic, holy water and a cross.

Library of Death:  Ghost Town – A town is visited by its first car which crashes into a demolitions storehouse, obliterating the whole town.  Fifty years later, two drivers stop off for petrol and ask the attendant for directions.  He sends them to a local town where the local sheriff arrests them.  He, and all the townspeople, are skeletons.  The undead victims of the accident fifty years ago.

They have been spending their afterlife punishing all drivers and when the two men get hold of guns and come out blasting, the Sheriff kills them both.  We then see the gas station attendant sending another victim to the town before pulling off his human mask, revealing that he too is a skeleton.

The Thirteenth Floor – Having dropped hit and run, puppy wounder Mr. Nelson onto a busy motorway in his thirteenth floor, Max toys with his victim before eventually scaring him unconscious.

However, Max is keen to avoid the attentions of Sergeant Ingram and the local constabulary and so he hypnotises a resident, Burt Runch, to carry Nelson away from the building.

Tales From The Grave ‘A Fatal Extraction’ – A new story in the anthology that is Tales From The Grave, this one features Thomas Thorpe, a dentist who targets his rich clients by dumping them through a trapdoor in his surgery and then sends his accomplice, Grimes, to burgle their homes.

When George Makepiece comes looking to relieve a toothache, Thorpe drops him through the trapdoor where Grimes is waiting in a boat.

Grimes takes Makepiece away, dumping him in the river but the plan appears to go awry when Makepiece springs out of the water seeking revenge.

A Ghastly Tale ‘The Summoning’ – A group of occultists worshipping Aknaton, some sort of demon, conduct a ceremony to raise the dead.  However, when their ritual works, the corpse that is awoken is none to impressed and asks them to keep the noise down.

Monster – With the Police and their dogs on the trail, Kenny and Terry run away from the hut they were staying in and manage to evade the Police by crossing over a trainline and hiding in a truck.  Later on the truck stops at a service station and Kenny quickly jumps out to buy some food.  However, when he is done the truck has driven off with his uncle Terry in it.

The Nightcomers – With Rick still unwilling to buy into the whole haunted house thing, he confronts the demonic figure that is stalking him and Beth and promptly gets smacked down.  They decide to run off, pursued all the way by the fiery hell beast until it corners them.  Luckily, their dead mother is able to tell Beth to use her ankh charm to repel the demon, which works.

Rick now believes her but, rather unwisely, decides to storm towards the house for revenge.  The house isn’t very impressed and spews blood down its steps, giving Rick a chance to reflect on what a twat he is.