When Rebellion acquired the rights to the old Scream! material, the expectation was that they would continue Hibernia’s great work with reprinting the old stories.  And at first they did with volumes dedicated to Monster and The Dracula Files but this volume, Scream & Misty Special #1 2017, was the first new content based on the old storylines.

This special contains stories from Scream! and Misty but also includes new strips that are assigned to Scream! but have no roots in the comic at all such as Return of Black Max (which is actually from Thunder comic) and Death-Man.  Max and Dracula get the two best stories.  The other ones in the Scream! section are intriguing but introduce characters that weren’t in our comic and only really set up the stories but don’t get a chance to go anywhere.

This story features a young man, Sam Bowers, who is trying to escape from a gang that film themselves beating up people and then put it on the internet.  He runs home to Maxwell Tower and ends up trapped in a lift with the gang.  Max, who is slightly malfunctioning, takes them all to the thirteenth floor.  Here the strip goes from old school black and white to an updated, colourful look.  Here we see that he is still torturing bad guys.

He dispenses a bit of ironic revenge on the gang, doing his best to break their minds.  Afterwards he lets them out and asks Sam if he can bring more bad people to him.  Sam agrees, looking happy to get some revenge.

This story feels like classic The Thirteenth Floor material but updated for modern times.  The art style is jarring at first but ultimately does a good job of updating things and gives Max’s hidden floor a surreal, macabre look.  The story is nine pages long but we’d have happily seen more of it.

Dracula is back and calling him Dr Arthur Culerman.  He finds himself at a dinner party where he is revealing parts of his life to the other guests, albeit stopping short of saying that he’s a vampire.  As the host, Rajani, goes into another room, we found out that she knows exactly who he is and knows how to kill him thanks to be trained by Dracula’s old foe Colonel Stakis.

As she re-enters the room, she finds that Dracula has turned one woman into a vampire and has killed the other guest.  Rajani kills the vampire but before she can kill Dracula, he turns into a bat and escapes.

The main thing about this story is the exquisite black, white and red art by Tristan Jones.  It is absolutely fantastic and the red accents give it a really stylish look.  The story is great also and has a nice callback to a Scream! issue where Dracula hides in a postbox.

While this story has no roots in the original comic, it appears in the Scream! half of this special.  It features Death-Man, a man who hunts bad guys and kills them so that one day he might be allowed to die.  We meet him but the story soon switches to Dr. Hoffman, an evil genius who lives in Raven’s Meet (which is notable for being the evil manor where The Nightcomers was set).

He’s creating a super villian of his own using an iron suit called The Iron Major (from Jet, another comic).  Elsewhere, Death-Man meets a group of heroes that want to recruit him.  They are a group of characters from old UK comics include The Leopard of Lime Street, Death Wish  and others.

This story has great art by 2000 AD artist Henry Flint but the writing is a little disjointed and none of it really makes sense at first.  They do include a guide to all the characters but the story never gets going and with these specials being an annual event, there isn’t much scope to develop anything.

A girl finds an old World War 2 medal and ends up transported into another dimension where the spirit of Black Max, a fearsome fighter pilot who can control bats, is trapped.  This one night, the night of a blood moon, is his chance to escape and unleash his evil on the world.  The girl escapes but still feels linked to him.  The story promises to continue in a Black Max special

Again, this has nothing to do with Scream! but is in our section.  It sets up some intriguing characters, and we always love Kek-W’s writing, but it’s short and doesn’t really do anything a bit of basic exposition.

This issue also includes some question and answer sessions with Misty and Ghastly as well as their “horror scopes” and two Misty stories Return of the Sentinels and Fate of the Fairy Hunter.

An alternate version of this issue was available, branded as Misty and Scream with Misty getting higher billing on the cover (see below). 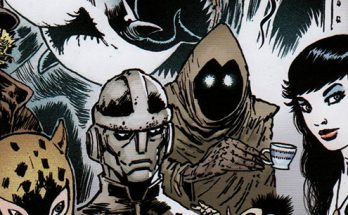 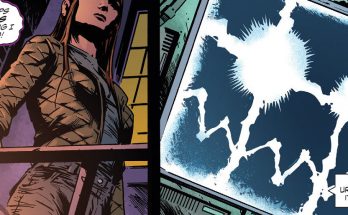 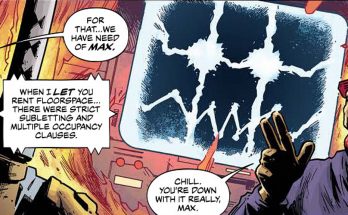